Regular Hours: The museum is open Wed to Mon from 9am to 5pm. Closed Tues. Pacific Combat Zone open Fri to Sun from 11am to 3pm. (Buy tickets HERE) 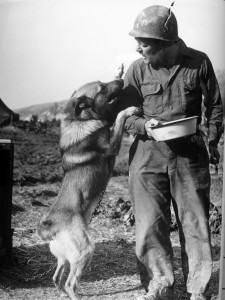 "Shep" the German Shepherd measures 12" long and wears a blue bandanna honoring the Dogs For Defense program with it's WWII logo.